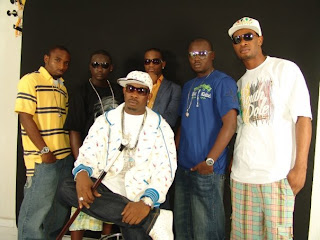 Popular spoof Nigerian website wazobiareport.com has created controversy with an article on D'banj and his Mo'Hits crew counterparts being involved with a secret global cult, the Illuminati. Read the article from wazobiareport.com below:

Lagos – Finally there is incontrovertible proof that Nigerian superstar entertainer, D’Banj, and other members of Mo’Hits record label headed by prolific producer, Don Jazzy, are 100% confirmed members of the uber-evil secret cult, the Illuminati.

The undeniable evidence was provided by artistes of the record label themselves, causing Nigerians to philosophically comment that ‘they have used their own hands to do themselves.’

The evidence in question is a video clip produced by the record label in which D’Banj, Don Jazzy, Dr Sid, Wande Coal and an unidentified man dance like gay men to D’Banjs’ new hit single, Oliver Twist. Dr Zen Solonso, a Zen expert and an expert on everything Illuminati, analysed the video and exposed all the hidden Illuminati symbols in it. According to him, one of the biggest objectives of the Illuminati is to turn everybody gay – this is why their known members like Kanye West, dress like Gay men. It would be recalled that D’Banj and Don Jazzy have recently signed up to Kanye Wests’ record label.

In the group’s Oliver Twist video, they did not only dance like gay men, they also invite people to record their own Oliver videos and post it to them at [email protected] And they even further enticed people with thousands of dollars that will be paid to the best video. Already there are lots of videos on Youtube showing young people, both boys and girls, dancing like gay men to the Oliver Twist song.

Dr Solonso also pointed out that in the group’s video Don Jazzy is wearing what looks like chequered trousers. “This alternating pattern of white and black squares is the Illuminati’s mind control method,” he said. Indeed, according to the expert, the song’s catchy tune and highly danceable sound is down to Don Jazzy’s pants. Dr Solonso also pointed out that at some point in the video the unidentified man walks across the camera, holding a red bag and what looks like an enchanted horn.

Finally, the expert drew attention to the sound speakers and other electronic equipment arranged to spell the word ILLUMINATI behind the artistes as they dance like gay men. This, according to him, is the strongest evidence that the video, the song, and the invitation for people to film their own Oliver Twist videos are nothing but an Illuminati plot to turn Nigerians gay. - Jowo Mabinu

However, it should be noted that this is all a joke and not meant to be taken seriously. Have a look at the website's disclaimer here; [i]This is an entertainment website. The articles, views, opinions, and every other content published on this site, unless stated otherwise, are totally made up, fictitious and without malice, fabricated for the sole purpose of entertaining you. Semblance to real people, places, or events are purely coincidental. This site is meant for people who are at least 18 years old.[/i]

However, Don Jazzy has taken offence with this spoof as he tweeted the following this morning on social networking site Twitter:

DONJAZZY Michael Collins
hahahahahaha this is the dumbest story i have ever read. guys pls read. i don laff tire bit.ly/qr6Fk9

DONJAZZY Michael Collins
its stories like this about me that makes me doubt that the shit exists in the first place. bit.ly/qr6Fk9 hisssss.

DONJAZZY Michael Collins
instead of the idiot to say they want promo for their site. RT @Ekpedekumoebila: Who's d fool behind dat?! *SMH*

Obviously, he was so angry that he did not give a link to wazobiareports.com directly and chose another website instead.

Posted by Abdulkabir Olatunji at 2:52 AM