How Not to Skydive 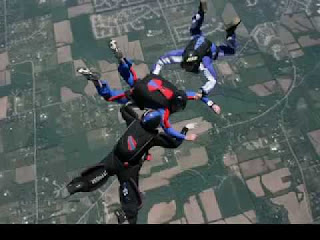 We watch them on television; movies, commercials or sport shows and we wonder why would anybody want to jump from a flying airplane? Yes, we all know it’s dangerous but we love the spectacle not as much as they (skydivers) themselves though.

I just came across this tragic story of Jack Fogle aged 27 from Kingston Washington. He suffered from quadriplegia which is also known as Tetraplegia and is defined by Wikipedia as: “paralysis caused by illness or injury to a human that results in the partial or total loss of use of all their limbs and torso; Paraplegia is similar but does not affect the arms. The loss is usually sensory and motor, which means that both sensation and control are lost.”

Jack was a skydiver and jumped 18,000 feet to his death yesterday, Monday. He is believed to have been impaired by his ailment from being able to activate his primary parachute whilst his back-up parachute failed to activate. He hit the ground at a speed estimated to be 120 miles per hour.

Investigations by law enforcement officers indicate that Jack’s skydiving equipment was in good order and he might have made a mistake that prevented his reserve parachute to deploy and prevent his death.

Jack had jumped from a plane with 7 other skydivers on the ill-fated dive and the testimonies of his colleagues and video of the event make the police belief that Jack’s death is an accident and not a murder or suicide.

I think people should stop risking their lives unnecessarily just for an adrenalin rush, this guy had skydived 125 time before but the 126th one ended his life. Not only that, he was partially disabled and one has to wonder: what on earth was he thinking and why would his family allow him to take such risks? I pray that God gives his family the fortitude to bear this loss.

Posted by Abdulkabir Olatunji at 6:26 AM