The 2nd selection of finalists of The Amateur Photographer Competition is set to hold on Thursday, May 1, 2012 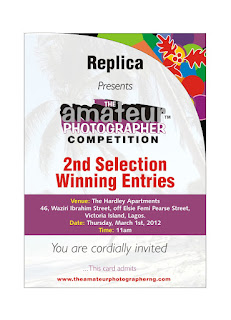 This extension will afford participants to recoup time and resources lost to the fuel subsidy strike . It will also aid them in increasing their catalogue and thus brighten their chances of winning. However, the big one – the Grand Finale - comes up on at Easter in April. It will be awash with special gifts as well as the star prize of a Kia Picanto.

Only last November, the presentation ceremony of the 1st Draw Winning entries was held at the premises of the organizers - Replica Digital Photo Centre at the Hardley Apartments, Victoria Island, Lagos. Of the ten shortlisted winning entries, Olugbewesa Ayodimeji emerged the winner of the Draw with his photograph titled “Lekki Sea View.” He was rewarded with a brand new 42 inch LCD flat screen television. In the second position was Gbemile Oluwatosin. Her photograph was titled, “Fire outburst”. “Double Rays” won the third prize for Amaikwu Chioma.

Interestingly, Lagos State Governor, Babatunde Raji Fashola (SAN), has emphatically thrown his weight behind the Amateur Photographer Competition, describing it as a job creating endeavour and a veritable cradle for emerging entrepreneurs, while urging those interested in this genre to diligently spend their time on this kind of gainful pastime.

The Amateur Photographer competition is coordinated by Barrister Ayo Gam-Ikon, MD, Replica Digital Photo Centre, a pacesetting all-in-one photo shop based in Ikeja, Lagos while legendary photographer, Don Barber sits as the head of a high profile panel of judges.
Posted by Abdulkabir Olatunji at 7:43 AM