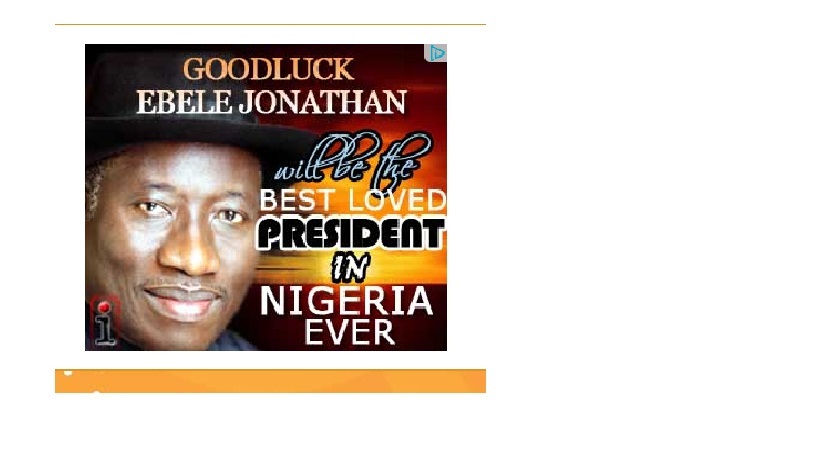 I just saw this banner advert on my blog and clicked on it. I was taken to this page: http://www.ipaidabribenaija.com/index.php/latest-news/item/6736. There are two articles on that page, the first is titled: "PRESIDENT JONATHAN WILL BE THE BEST LOVED PRESIDENT IN NIGERIA EVER" signed by a group called: "ONE NIGERIA MOVEMENT" from
UGBUWANGUE,WARRI SOUTH LOCAL GOVERNMENT.

It also has a sequel with the following listed as President Goodluck Jonathan's achievements so far:

1. President Goodluck Jonathan became the first Nigerian President to be WARNED PUBLICLY not to contest for elections on account of ethno-regional selfish interest, AND PROMISED MAYHEM and GRIDLOCK if he does.

3. First President/Head of State from the ENTIRE SOUTHERN NIGERIA, who is neither a NORTHERNER nor an EX-MILITARY man.

6. First President/ Head of State to evacuate Nigerians from trouble spots overseas by airlifting thousands of stranded citizens back home.

8. First President/ Head of State to sign into law the FREEDOM OF INFORMATION ACT

10. First President/ Head of State to introduce a national tax policy to create a self-sufficient economy that could bring development to the people.

11. First president to pay attention to our International and local Airports - Kano airport upgraded after 57 years, other airports upgrades in progress.

14. First President to address the bad state of the Benin-Ore road which was rehabilitated after 20 years.

15. First president to rejuvenate our comatose Railways back to life after 20 years of lull in the sector, Colonial laws under review, States and Private investors welcome in the railways sector.

17. First in decades to reduce salaries of public servants and examine the proliferation of different salary structures in the public service in the federation

18. First to deliver on Nine New Varsities, to accommodate, the growing number of admission candidates/population

20. First to follow due process/rule of law in government conduct

21. First president to be thought of, by the average Nigerian, as his/her COUNCILLOR, LGA CHAIRMAN, ASSEMBLYMAN, GOVERNOR, REP OR SENATOR and CHIEF JUSTICE in one fell swoop, not minding the fact that everyone has his/her job cut out in a democracy as this is not a MILITARY DICTATORSHIP- that the buck does not stop at his desk in matters involving states, LGAs and the Judiciary or Legislature; that their jobs are complementary and they are allocated funds every month from FAAC, not to 'chop', but to work!

23.FIGHTING FOR FREE AND FAIR ELECTIONS

25.FIGHT AGAINST BRIBERY AND CORRUPTION

28.PERMANENTLY FLOW OF PETROLUEM PRODUCTS EVER IN NIGERIA

29.INCREASE OF OUR DAILY OIL PRODUCTION OUTPUT TO THE HIGEST EVER

31.ENTRY OF IMPORTED GOODS INTO NIGERIA IN 48 HOURS

The sequel was signed by THE PUBLISHER http://www.ipaidabribenaija.com

It looks as if President Goodluck Jonathan has already began his 2015 campaign for President using the same tactics he used for the 2011 Presidential election. The strategy involves different little-known groups coming out to publicly show support for the President in the media via press conferences, newspaper adverts, TV and radio jingles and massive advertisement over the internet. Personally, I think it is unfortunate that this is happening but I am not surprised at all.

Posted by Abdulkabir Olatunji at 3:57 AM