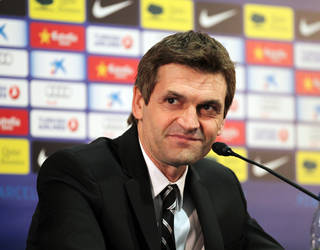 Without a ball taking a single bounce on the pitch, the roller-coaster ride of emotions continues. Just hours after hearing Eric Abidal will have recovered from his tumor relapse enough to start playing again soon, the upsetting news that Tito Vilanova's tumor has also reoccurred crashes into the football world.
Vilanova previously had to have surgery to remove the tumor that had appeared on a gland in his throat and was out for about a month, from November to December last year.

Vilanova was Pep Guardiola's right-hand man from the time the two coached the reserve team together, Barcelona B. Tito followed Pep into the senior side, in which they went through an unprecedented run of success. Barca under the Guardiola-Vilanova regime won 14 trophies, including two Champions Leagues.

He first received substantial international attention in the 2011 Spanish Supercup, when Real Madrid's coach Jose Mourinho poked Vilanova in the eye. As Mourinho slinked away, Tito gave him a shove.

When Mourinho publicly insinuated that Barcelona were directors of a foul conspiracy, Guardiola always opted to take the high road. Pep wanted to play football, not mind games. There was a lot to admire there.
But it was those mind games, partially, that drained Guardiola and drove him to take a break from football.

There were rumors that an outside coach would take over, but the board really only had one man in mind as his successor. Vilanova landed his first top-division head coaching job last summer when he took over Barca.

Vilanova was chosen because he offered continuity and stability. However, he wasn't the same man. He had his own way of doing things.

Source: Barcablaugranes
Posted by Abdulkabir Olatunji at 10:35 AM