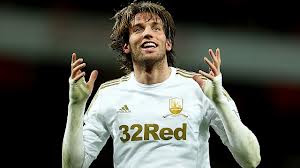 The English Premier League's breakout star this season, Swansea's Michu as signed a new deal with the club which should keep him there at least till 2016.

MICHU: “I’ve read and listened to all the speculation, but it doesn’t interest me, and that's why I've signed a new contract."

Posted by Abdulkabir Olatunji at 5:10 AM