The big news for environmentalists and oil companies from yesterday... 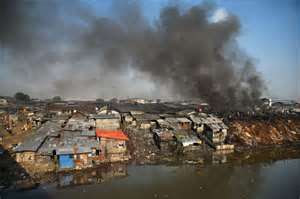 A Dutch court has rejected a bid by Nigerian farmers to hold Shell’s parent company responsible for oil damage to their villages, saying that only the Anglo-Dutch oil giant’s Nigerian subsidiary was partly responsible.
On Jan. 29, the court dismissed four out of five allegations against the company but ordered it to pay compensation to one Nigerian farmer.

The landmark case against the Anglo-Dutch firm was brought by four Nigerian farmers, a fisherman and Friends of the Earth.

The level of damages in the case will be established at a later hearing.

The case is linked to spills in Goi, Ogoniland and Oruma in Bayelsa State and a third in Ikot Ada Udo, Akwa Ibom State. The farmers had alleged that oil spills had poisoned their fish ponds and farmland from leaking pipelines.

The judge said Shell Nigeria should have done more to prevent sabotage. The Delta’s clean water and fertile farmland used to produce an abundance of food and a good living for residents. Since oil has poisoned the land and water, people look in vain for jobs with the oil companies and, now impoverished, sometimes siphon oil from the ubiquitous above-ground pipelines.

The only victorious plaintiff, Friday Akpan, told AFP by telephone from Port Harcourt in the Niger Delta: “I am happy about the ruling … The pollution damaged my farmland, so their saying that I won in the case is not a surprise because it is true.”

Akpan, a fish farmer with 12 children, said oil pollution caused his fish to die and that people were scared away by the “smell of dead fish.”

Both sides claimed victory in a case that pressure groups had hoped would set a precedent for global corporate responsibility.

Posted by Abdulkabir Olatunji at 7:58 AM