Sultan says no one can Islamise Nigeria

The Sultan of Sokoto, Alhaji Muhammad Sa’ad Abubakar is reported to have made this comment yesterday... 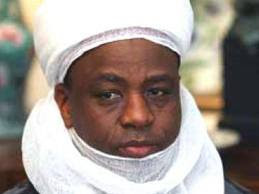 No one can Islamise Nigeria - Sultan

THE Sultan of Sokoto and President-General of the Jama’atu Nasril Islam (JNI), Alhaji Muhammad Sa’ad Abubakar, in Kaduna, on Monday, said nobody could turn Nigeria into an Islamic state.

He also said it was wrong to ascribe anything to the Bayelsa chopper crash in which General Patrick Azazi, Governor Ibrahim Yakowa and others were killed, adding that “only God has the powers to give or take life.”

The Sultan spoke at the meeting of the Northern Governors’ Peace and Reconciliation Committee, which had in attendance John Cardinal Onaiyekan, Bishop Mathew Hassan Kukah, Sheihk Ahmed Lemu, other clerics and traditional rulers from the North.

According to the Sultan, God had made Nigeria to a multi-religious and multi-ethnic country and would have made Nigerians to be the same if he liked, adding, therefore, that no one could  turn the country into an Islamic country as was being expressed.

The Sultan quoted the Qu’ranic verse where it was said that there was no compulsion in religion, saying that those attacking places of worship were not good Muslims or Christians.

He said though they were not given a place in the constitution, traditional and religious leaders had played their part in the past and would not give up until the challenges were permanently solved.

The traditional ruler lamented the inability of relevant government authorities to implement series of recommendations that would have helped to address the security challenges in the country.

“We wrote a memo of about nine pages or thereabout covering various issues affecting the country and the North in particular to the then acting president and now president, Dr Goodluck Jonathan by the Nigeria Inter Religious Council (NIREC), where we suggested solutions to the problems,” he said.

In his remarks on the occasion, Cardinal Onaiyekan advocated the need for  stakeholders to address the issue with a view to putting a permanent end to the crisis.

Posted by Abdulkabir Olatunji at 11:42 PM