Wesly Sneijder tells Galatasaray fans: I came here to be a legend

Good luck with that, you are a truly gifted midfielder Wesley Sneijder... 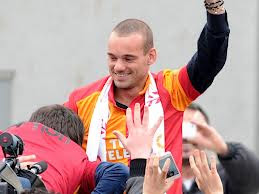 Galatasaray AŞ have pulled off an impressive coup by signing Dutch international playmaker Wesley Sneijder from FC Internazionale Milano for a fee in the region of €7.5m.

Sneijder's move ends an association with Inter that began in 2009 following his switch from Real Madrid CF. The 28-year-old, who has been capped 90 times by his country and has featured in five major international tournaments, has signed a three-and-a-half-year contract with Cim Bom.

"I realised how big the Galatasaray community is after arriving at the airport," said Sneijder. "I am really very happy and proud that I will serve such a big club. The derby match against Beşiktaş [on Sunday] is crucial. I recovered from injury a long time ago and continued training by myself.

"I am in good shape and if my coach picks me I want to play in the derby. It's a real honour for me to be compared to a legendary player like [Gheorghe] Hagi. I know how important his name is at Galatasaray. He was a legend and I came here to be a legend."

Posted by Abdulkabir Olatunji at 8:13 AM