Ras Kimono, the Nigerian Reggae star once sang: "Rumour mongers me no like dem". Well, it looks like Bayelsa State in Nigeria's NigerDelta region is singing the same tune with this story... 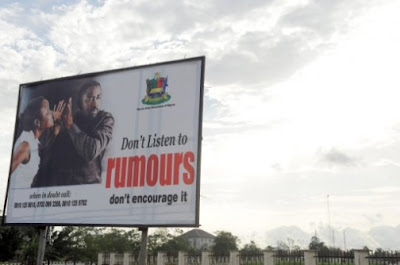 The government of oil rich Nigerian state of Bayelsa decided something needed to be done, to stamp out the spreading of rumours. So billboards have been erected around town and a committee has been named.
The campaign against rumour mongering is now underway in the home state of Nigerian President Goodluck Jonathan.

“What rumours are they scared of?” said Simon Goladi, a 34-year-old sociology student walking near one of the anti-rumour billboards in the state capital Yenagoa. “It’s just a waste of resources.”

While it may seem odd that the state, located in the country’s oil-producing Niger Delta region and with an impoverished population, has decided to spend energy and resources on stopping rumours, there is precedent.

“That points to the fact that rumours were a problem,” Tarinyo Akono, a member of the committee who also works for the state information ministry, said of the previous government’s decision to have an adviser on rumours.

“It’s also important to check this thing because in the long run the problem might overwhelm the people.”
So far the most visible signs of the campaign have been billboards depicting actors pretending to pass rumours to each other and urging residents to “say no to rumour mongers.”

They have been erected at main intersections and phone numbers are listed for residents to call “when in doubt.” Akono specified that the numbers were to allow residents to verify whether information being passed on to them was true, however no one was answering at any of the three numbers earlier this week.

Niger Delta activist Anyakwee Nsirimovu of the Institute of Human Rights and Humanitarian Law condemned the campaign, saying he believed it was simply meant to protect the governor from criticism as well as hand out government positions to allies – a well-worn practice in Nigeria, where deeply rooted corruption has kept meaningful development out of reach in many cases.

“They want to, through the backdoor, introduce censorship,” he said.

Bayelsa’s governor is no stranger to criticism over alleged patronage. He faced an uproar last year when the wife of the president, a political ally, was granted a top government post.

But Akono says the anti-rumour campaign is both legitimate and important. Rumours are capable of breaking up marriages or causing false information to spread about violence that can lead to shops closing, he said.
He insists that no one will be arrested for spreading rumours and that the campaign is merely meant to persuade people to resist the temptation to dish dirt.

Asked if there was something specific that prompted the campaign, he gave examples of rumours spreading about the governor himself.

“Meanwhile, there was no iota of truth in all of these things,” he said. “Business people also get scared. If not checked, it could also result in some of the contractors running away from the state.”

But considering those examples, did that mean the effort was mainly aimed at protecting the governor?
“No, I’m just giving you instances,” said Akono. “There are other instances.”

Opinions around town were difficult to gauge. While sociology student Goladi said he felt it was all a waste of time, another resident working at a nearby automotive spare parts shop agreed with the campaign and even went further, arguing that people should be arrested for spreading false rumours.

There were widespread allegations in in the local press that the ex-governor he was referring to dressed as a woman to disguise himself when he fled Britain after being charged with money laundering. It has never been confirmed and the ex-governor later denied it.

The cost of the anti-rumour campaign is not yet clear. Akono said the budget is still being put together, though he specified that his position did not include a salary.

However, committee members would likely receive allowances to cover their expenses, he said.
“Nobody’s limiting criticism,” he said. “Criticism is different from falsehood. If there is a politician who is not doing well, I can come out and say, ‘my brother, you are not doing well.’ That is different than spreading rumours.”
Source: AFP

Posted by Abdulkabir Olatunji at 3:53 AM