Controversy over death toll from fighting in Baga town

This sad event occurred over the weekend and different reports of what transpired have been given. President Goodluck Jonathan has constituted a committee to look into the matter and report what exactly happened... 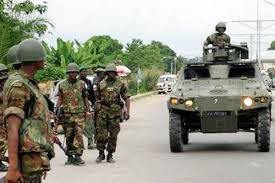 
KANO, Nigeria — Local government officials and a military spokesman in Nigeria agreed that security forces and Islamist militants had battled in recent days in the country's far northeast. But they offered widely varying accounts Monday of how many people, including civilians, had been killed.

Some officials said about 185 people were slain in the clashes, with some residents blaming government troops in part for the deaths. Security officials put the number lower.

The fighting began Friday in Baga, a fishing community near Lake Chad, but news of the violence reached Abuja, the capital, only late Sunday. Troops from Niger, Chad and Cameroon, part of a multinational task force to fight cross-border crime, were also involved in the clashes, according to witnesses.

Lawan Kole, chairman of Kukawa municipality, which covers Baga, said local authorities buried 185 bodies.
"Some of the bodies were burned beyond recognition, so it has been very difficult to establish their identities," Kole told Gov. Kashim Shettima of Borno state, who toured the town Sunday. Baga is located in Borno. "I can't say how many of these bodies were of residents or soldiers or militants."

Nwakpa O. Nwakpa, a spokesman for the Nigerian Red Cross Society, said 187 had been killed and 77 were hospitalized, and that 300 houses were burned down.

But Borno military spokesman Sagir Musa said the reported death toll was highly inflated. "There could have been some casualties, but it is unthinkable to say that 185 people died," Musa said. "On my honor as an officer, nothing like that happened."

Posted by Abdulkabir Olatunji at 2:16 AM