This is fantastic, looking forward to it... 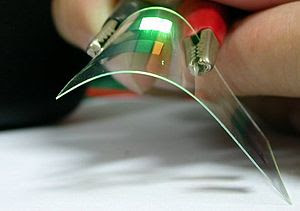 In a call discussing the company's recent financial results, LG announced it will introduce a smartphone with a flexible OLED screen in the fourth quarter of this year. The company's vice president of mobile Yoon Bu-hyun said his division was working closely with LG Display to bring a phone to consumers. It's unlikely that we'll see a flexible smartphone — the battery and circuitry should prevent that — but we could see a device with a wraparound display, something like Samsung's prototype from CES.

Manufacturing difficulties often lead to delays in next-generation displays coming to market. LG and Samsung have struggled to release OLED TVs; both have missed several release dates, although thankfully availability is improving. Both companies have also been saying flexible displays are on their way for some time now, but aside from the occasional trade show demo, nothing has materialized. Today's comments echo a separate announcement last week where LG promised curved OLED TVs will go on sale later this year.
Speaking with The Wall Street Journal, analysts said investors will be keeping a close eye on whether LG can deliver on its smartphone promise, as the production yields for next-generation displays are still low.

Posted by Abdulkabir Olatunji at 2:36 AM