This man has many Africans 'under his spell' ... 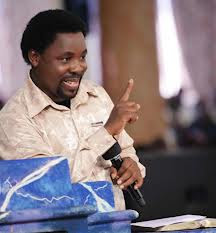 Police say they were overwhelmed by the large crowd when a stampede killed four people at a church in Ghana's capital, Accra, on Sunday.

Thousands of people flocked to the evangelical church for "holy water", which they believed had healing powers, leading to the crush.

"All of us were caught by surprise. No-one knew the crowd will be so huge," said police spokesman Freeman Tetteh.

The church is run by prominent Nigerian preacher TB Joshua.

He is one of the wealthiest and most popular evangelical clerics in Africa and his Synagogue Church of All Nations claims it can perform miracles, such as curing blindness.

Posted by Abdulkabir Olatunji at 4:42 AM