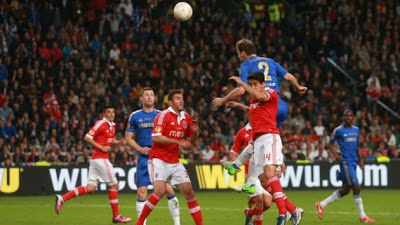 Chelsea simultaneously hold the UEFA Champions League and the Europa League after a stunning 2-1 victory over Benfica last night in the final of the latter at the Amsterdam Arena.

Benfica started brightly with Cardozo flashing a header over the bar and had better spells of pressure. However, Chelsea captain on the night, Frank Lampard had a stunning shot parried over the bar by Benfica goalkeeper, Arthur which was the closest both teams came to scoring in a goal-less first half.

The second half followed the same pattern until Fernando Torres who had hitherto been pedestrian in the game broke free from Luisao and beat Arthur in goal with great composure before slotting the ball into the net to give Chelsea a 1-0 lead.

Cardozo equalised for Benfica 8 minutes later from the penalty spot after Chelsea right back, Azpilicueta handled the ball in the penalty box with the referee awarding a penalty to the Portuguese.

The final seemed poised for extra time until 2 minutes into added time when Branislav Ivanovic rose up majestically to nod-in a great goal to give Chelsea a 2-1 lead and victory in a very entertaining final.

Chelsea now hold both the Europa Cup and UEFA Champions League until new champions are crowned for the latter on May, 25, 2013 at Wembley stadium with Bayern Munich taking on Borussia Dortmund in the final of European football's elite club competition.