In a landmark case, an Iranian and his Nigerian accomplice have been sentenced to 17 years in prison for importing arms into Nigeria illegally... 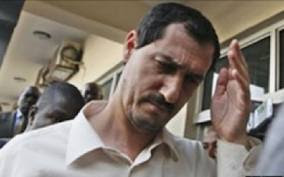 A Federal High Court, Lagos has sentenced an Iranian,  Azim Aghajani, and his Nigerian counterpart, Ali Jega, to 17 years imprisonment for illegal importation of firearms into the country in 2010.

Justice Okechukwu Okeke, in his judgment on Monday found them guilty on four out of five counts preferred against them by the office of the Attorney-General of the Federation.

The judge sentenced the convicts to five years for each of the three counts and to two for one of the counts, adding that the sentences would run concurrently from February 1, 2011, when they were arraigned.
Aghajani and Jega were  alleged to have illegally imported 13 by 20 feet container load of firearms and explosives into Nigeria from Iran in July 2010.

Source: Punch
Posted by Abdulkabir Olatunji at 12:33 AM