This brazen crime is almost unbelievable... 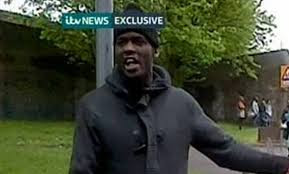 Woolwich attack: terrorist proclaimed 'an eye for an eye' after attack

A British soldier has been butchered on a busy London street by two Islamist terrorists, one of whom proclaimed afterwards: “An eye for an eye and a tooth for a tooth.”

In the first terrorist murder on the British mainland since the 7/7 suicide bombings of 2005, the men attempted to behead the soldier, hacking at him like a “piece of meat” in front of dozens of witnesses, before both were shot by police who took around 20 minutes to arrive.

Speaking with a London accent, holding a knife and a meat cleaver and with his hands dripping with blood, he said: “We swear by almighty Allah we will never stop fighting you until you leave us alone. Your people will never be safe. The only reason we have done this is because Muslims are dying by British soldiers every day.

“We must fight them as they fight us. An eye for an eye and a tooth for a tooth. I apologise that women had to witness this today but in our lands our women have to see the same. You people will never be safe. Remove your government, they don’t care about you. Do you think David Cameron is going to get caught in the street when we start busting our guns? Do you think your politicians are going to die?

“No, it’s going to be the average guy like you, and your children. So get rid of them. Tell them to bring our troops back so we, so you can all live in peace.”

Witnesses said that the men used a car to run over the soldier just yards from the Royal Artillery Barracks in Woolwich, south-east London, before setting about him with knives and a meat cleaver as if they were “trying to remove organs”. One unconfirmed report suggested that he had been beheaded.

Passers-by said they thought at first that the attackers were trying to help the man, who was wearing a Help for Heroes T-shirt, and only realised they were killing him when they got closer.

As they attacked the soldier, one of the men shouted “Allahu akbar”, or God is Great, according to the BBC, while another witness said they appeared to pray next to the body as if the solder was a “sacrifice”.

Their victim, thought to be aged around 20, had reportedly been on duty at an Army recruitment office in central London and was on his way back to the barracks when he was murdered at 2.20pm.

It emerged that passers-by went to the soldier’s aid. One of the killers ordered that only women could tend to the body, not men.

There were also questions over why it took around 20 minutes for armed police to arrive on the scene, during which time the killers calmly walked up and down the road, carrying their bloodied knives and a pistol, while members of the public confronted them.

When police did arrive, both gunmen tried to rush at the police and were shot, reportedly by a female officer.
After the killing, one of the men, believed to be a British-born Muslim convert, spoke calmly into a witness’s video phone.

Posted by Abdulkabir Olatunji at 2:27 AM