Woman rescued after 17 days in Bangladesh Factory rubble is fine 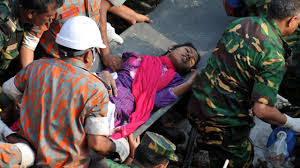 Woman rescued after 17 days in Bangladesh rubble
Even amid the euphoria over finding a woman alive in the rubble of a garment factory that collapsed more than two weeks ago, rescuers returned to the grim task of dismantling the wreckage and retrieving decomposing bodies, knowing there was little chance of finding any more survivors.\

The death toll from Bangladesh's worst industrial disaster is more than 1,000 and climbing. More than 2,500 people were rescued in the immediate aftermath of the April 24 disaster, but until Friday, crews had gone nearly two weeks without discovering anyone alive.

Then, in the midst of what had become a grim search for decaying bodies following the world's worst garment industry disaster, rescuers found a woman alive, providing a much-needed boost for the weary workers.

For 17 days, the woman, a seamstress, lay trapped in a dark basement pocket beneath thousands of tons of wreckage as temperatures outside climbed into the mid-30s Celsius. She rationed food and water. She banged a pipe to attract attention. She was fast losing hope of ever making it out alive.

In the ruins of the collapsed eight-store garment factory building above her, the frantic rescue operation had long ago ended.

"No one heard me. It was so bad for me. I never dreamed I'd see the daylight again," the seamstress, Reshma Begum, told Somoy TV from her hospital bed after her astonishing rescue on Friday.

The miraculous moment came when salvage workers finally heard Begum's banging. They pulled her to safety. She was in shockingly good condition, wearing a violet outfit with a large, bright pink scarf.

"I heard her say, 'I am alive, please save me.' I gave her water. She was OK," said Miraj Hossain, a volunteer who crawled through the debris to help cut Begum free.

The rescue was broadcast on television across Bangladesh. The prime minister rushed to the hospital, as did the woman's family to embrace a loved one they thought they'd never again see alive.

On April 24, Begum was working in a factory on the second floor of Rana Plaza when the building began collapsing around her. She said she raced down a stairwell into the basement, where she became trapped near a Muslim prayer room in a wide pocket that allowed her to survive.

Her long hair got stuck under the rubble, but she used sharp objects to cut her hair and free herself, said Maj. Gen. Chowdhury Hasan Suhrawardy, the head of the local military units in charge of the disaster site.

"There was some dried food around me. I ate the dried food for 15 days. The last two days I had nothing but water. I used to drink only a limited quantity of water to save it. I had some bottles of water around me," Begum told the television station, as doctors and nurses milled about, giving her saline and checking her condition.

After the building collapsed, Begum's mother, Zobeda Begum, spent sleepless nights rushing from one place to another looking for her daughter, with other family members joining the search. When they found out she had been rescued, they raised their hands in prayers.

"I just could not believe it when I saw her in the hospital," the mother, a frail woman in her 60s, said tearfully.
Dhaka's Prothom Alo newspaper quoted Maj. Fakhrul Islam, a doctor at the hospital, as saying, "By the grace of Allah, Reshma is doing well. She is still under intensive care. She is out of danger."

Before Friday, the last survivor had been found April 28, and even her story ended tragically. As workers tried to free Shahina Akter, a fire broke out and she died of smoke inhalation.

Crews were instead engaged in the painstaking work of trying to remove bodies so the victims' families could bury their loved ones. They eventually approached the section where Begum was trapped.

"I heard voices of the rescue workers for the past several days. I kept hitting the wreckage with sticks and rods just to attract their attention," Begum said.

She finally got the crews' attention when she took a steel pipe and began banging it, said Abdur Razzak, a warrant officer with the military's engineering department who first spotted her in the wreckage.

The rescue crews could not believe there might be a survivor. "But within minutes, we were sure that there was someone," Razzak said.

The workers ran into the dark rubble, eventually getting flashlights, to free her, he said.

They ordered the cranes and bulldozers to stop immediately and used handsaws and welding and drilling equipment to cut through the iron rod and debris still trapping her. They gave her water, oxygen and saline as they worked.

Hundreds of people engaged in removing bodies from the site in recent days raised their hands together in prayer for her survival.

"God, you are the greatest, you can do anything. Please allow us all to rescue the survivor just found," said a man on a loudspeaker leading the supplicants. "We seek apology for our sins. Please pardon us, pardon the person found alive."

After 40 minutes, she was free.

"When we were able to reach there, we lifted her together with our hands and brought her out to put her on a stretcher. She was baffled as rescuers outside shouted 'God is great,"' said Hossain, one of her rescuers.

Soldiers and men in hard hats carried Begum on a stretcher to a waiting ambulance, which brought her to a military hospital. Her rescuers said she was in good condition, despite her ordeal. Razzak said she could even walk.

"She was fine, no injuries. She was just trapped. The space was wide," said Lt. Col. Moyeen, an army official at the scene who uses only one name.

Doctors at the hospital told Bangladeshi television that Begum was out of danger and that her kidney and liver function were fine.

Begum survived for more than two weeks in temperatures that touched the mid-30s C.
"This is just a miracle, this is so pleasing!" said Razzak, the warrant officer.

Begum told her rescuers there were no more survivors in her area. Workers began tearing through the nearby rubble anyway, hoping to find another person alive.

"Reshma told me there were three others with her. They died. She did not see anybody else alive there," Suhrawardy said. The bodies were eventually recovered from another section of the building not far from Begum, he said.

Begum's sister Asma said she and her mother kept a vigil for the seamstress, who is from the rural Dinajpur district, 270 kilometres north of Dhaka. She said they had been losing hope amid the endless string of grim days, when scores of bodies and no survivors were removed from the rubble.

"We got her back just when we had lost all our hope to find her alive," she told Somoy TV. "God is so merciful."

Prime Minister Sheikh Hasina called Begum in the hospital, and the rescued woman began crying on the phone, Suhrawardy said. She told Hasina: "I am fine, please pray for me," he said.

Hasina, whose government has come under criticism for its lax oversight over the powerful garment industry, raced to the hospital by helicopter to meet her and congratulated the rescuers, officials said.

"This is an unbelievable feat," Hasina was quoted as saying by her assistant, Mahbubul Haque Shakil.

Begum lived in a rented house in this Dhaka suburb with her sister, who worked at a different garment factory.

Officials said Saturday that 1,081 bodies had been recovered from the ruins of the fallen building, which housed five garment factories employing thousands of workers. They said 780 bodies had been handed over to families.

Suhrawardy said rescuers returned to work soon after finding Begum. He would not specify a time frame for the recovery operation.

The disaster has raised alarm about the often deadly working conditions in Bangladesh's $20 billion garment industry, which provides clothing for major retailers around the globe.

"We are working carefully," he said. "If we get any ID card or mobile phone with them, we can still identify them. Our sincere effort is to at least hand over the bodies to the families."

Brig. Gen. Azmal Kabir, a top official of the military's engineering section, said more than half of the estimated 7,000 tons of debris have been removed from the site but he did not know when the work would be finished.

Officials say the owner of Rana Plaza illegally added three floors and allowed the garment factories to install heavy machines and generators, even though the structure was not designed to support such equipment.
The owner and eight other people, including the owners of the garment factories, have been detained.

Posted by Abdulkabir Olatunji at 6:40 AM

Email ThisBlogThis!Share to TwitterShare to FacebookShare to Pinterest
Labels: Bangladesh, Womn saved from rubble after 17 days