Well, the Movement for the Actualisation of the Sovereign State of Biafra (MASSOB) is not a government...

The Alaba International Market Traders’  Union, on Saturday, defied the sit-at-home order by the Movement for the Actualisation of the Sovereign State of Biafra (MASSOB).

The pro-Biafra group had directed Igbos all over the world to stay in-doors and mourn Igbo natives, who had lost their lives to the Boko Haram insurgency.

However, our correspondent, who monitored the situation in the Alaba Market, reports that the MASSOB order was ignored as the businessmen and women went about their normal duties undisturbed.The police had a few days earlier urged the union in the market to ignore the  order, vowing to deal decisively with any group that disrupted the peace in the market. There was no unusual movement of security agencies as policemen remained at their normal posts while business went on smoothly. 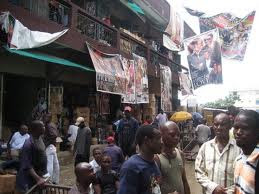 Although commercial activity were slow in the early hours of the day, they later picked up. Shop owners closed earlier than normal because it was a Saturday and not as a result of the sit-at-home order by MASSOB,
Few stalls in the streets were locked but commercial activities were booming throughout the day.
One of the major importers in the market, who did  not want his name mentioned said, “MASSOB cannot order for the closure of the market or a sit-at-home order (sic).”

He said, “Alaba International Market belongs to the government and not MASSOB. We are occupants of the market and this is where we make what we live on. Only the government can direct us to close the market and there must be a better reason for that. [The] market is open for business and people are going about their normal businesses unmolested.”

Posted by Abdulkabir Olatunji at 10:45 PM