What a great season for a great team... 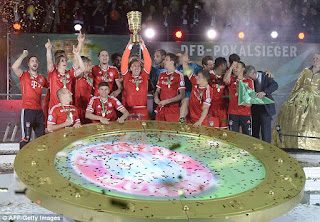 Bayern Munich beat Stuttgart 3-2 to win the DFB Pokal and become the first German club to win the treble.
A week after Bayern beat Borussia Dortmund in the Champions League final at Wembley, they built up a 3-0 lead in the DFB Pokal final, only for Stuttgart to score twice in nine minutes. Bayern held them off over the final 10 minutes of the match with Thomas Muller's penalty and a Mario Gomez's brace (press button twice) proving to be enough to win the cup for a record 15th time.

So manager Jupp Heynckes ends his time at Bayern with a third trophy, which he pretended to drink out of before getting drenched in beer by his players. Your move, Pep Guardiola.

Posted by Abdulkabir Olatunji at 2:21 PM