My Juju Failed Me- Polytechnic Rapist 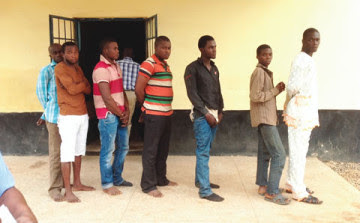 ONE of the seven suspects paraded by the Ekiti State police command for alleged rape has lamented that his juju failed him, a reason he said the police were able to arrest him.

The police had paraded the student, Kunle Arelepo and an alleged accomplice, Oluwaseun Komolafe, both ND II students of Crown Polytechnic, Ado Ekiti; a security guard with the institution, Mr Seyi Adanbioje; a proprietor of a nursery and primary school in Ado-Ekiti, who allegedly raped an 11-year-old pupil of his school, Mr Babatope Ibitoye and a 17-year-old boy, who allegedly defiled a three-year-old girl.

The students and the security guard were arrested for the alleged gang-rape of an 18-year-old new female student of the institution, with the police saying that two other suspects, Kehinde Adeyemi and Ayo Olomola (also known as AY Bishop), were at large.

Arelepo said an incantation translated into English Language that he had been reciting, but could not memorise led to his arrest, as the juju, if memorised, would have prevented the police from arresting him.
According to the state Police Public Relations Officer, Mr Victor Babayemi, Arelepo, 20 and Akomolafe, 23,  were arrested in connection with the crime, claiming that Olomola had earlier been expelled by the institution for alleged rape.

Babayemi added that the suspects had gone to the house of their victim, broke the door to her room, “tied her hands and gang-raped her.”

The police also alleged that “they also robbed her of her phone and the sum of N5,000,” adding that “a security guard at the polytechnic, Adanbioje, 28, was also found to be part of the gangsters.”

The police alleged that the security guard was “told to take the girl to the police station and make a report, but he took a detour to his house, where he also raped the victim.”

The other suspects, Tope Babatope and Tope Oluwasusi, according to the police, were arrested in Ilawe, headquarters of Ekiti South West Local Government Area of the state, after they had accosted their victim on her way home,  as “she was forcefully taken to their home at 12, Iro Street, Ilawe-Ekiti, where she was raped.”

Posted by Abdulkabir Olatunji at 1:17 AM