Iftar is the formal breaking of fast at sunset by Muslims during Ramadan. United States President Barack Obama hosted one for Muslim Americans... 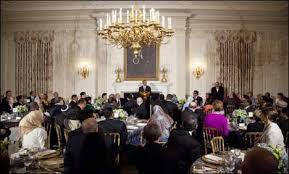 Obama Thanks Muslim Americans for Their Contributions

President Obama thanked Muslim Americans for their many contributions to U.S. society at the fifth White House iftar under his administration.

Iftar refers to the evening meal when Muslims break their daily fast during their holy month of Ramadan.
“Throughout our history, Islam has contributed to the character of our country, and Muslim Americans, and their good works, have helped to build our nation — and we’ve seen the results,” Obama said.

Among the entrepreneurs whom Obama honored at the July 25 dinner were: Shazi Visram, of Pakistani and Tanzanian heritage, who founded Happy Family, a company that offers organic foods for babies; and Iya Khalil, of Libyan descent, who co-founded a biotechnology research company focused on genomic medicine, a branch of medicine dealing with a patient’s risks for hereditary diseases.

The 2013 White House iftar hosted diplomatic representatives from 46 countries, members of the U.S. Congress and local U.S. officials such as Arjumand Hashmi, mayor of Paris, Texas. Hashmi, a Pakistan-born cardiologist, attracted national attention when he was elected mayor in 2011 by the overwhelmingly white and Christian citizens of a small Southern city.

The White House gala wasn’t the only high-level iftar held by U.S. officials. Secretary of State John Kerry held one July 24 at the State Department, where he said that “when we speak of our faith, it can’t be just about our personal relationship with God. … Our partnerships, the way we work every day in life, the way we reach out country to country, people to people, they have to foster a mutual respect and underscore the freedoms that we seek.”

Source: US Embassy
Posted by Abdulkabir Olatunji at 2:58 AM