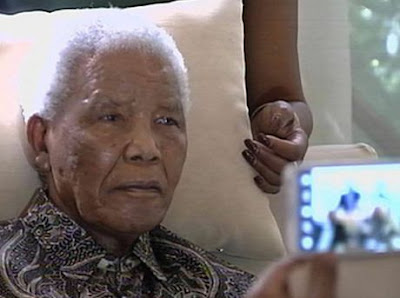 The South African gogvernment on Saturday refuted media reports that ailing former president Nelson Mandela has been discharged from
hospital.

"The Presidency has noted incorrect media reports that former President Nelson Mandela has been discharged from hospital," Maharaj said.

"At times his condition becomes unstable, but he responds to medical interventions," said Maharaj.

Since Mandela was rushed to a Pretoria hospital on June 8 for a recurring lung infection, the Presidency has declared his condition as critical but stable.

Maharaj said doctors were still working hard to effect a turnaround and a further improvement in his health and to keep Mandela comfortable.

Maharaj's words dashed hopes for Mandela's quick recovery. News about Mandela's health has been fluctuant. Sometimes he was said to have showed signs of sustained improvement, and most often he was reported to be in critical but stable condition.

On Aug. 9, his daughter Zindzi Mandela gave the most encouraging news when she said the anti-apartheid icon managed to sit up.

"He's fine, Tata (father) now manages to situp, like now he sits up in a chair for a fewminutes in a day, every day you know hebecomes more alert more responsive," Zindzi
reportedly said.

The Nobel Peace Prize laureate has been suffering from a recurring lung infection, which is the result of tuberculosis.

Source: Xinhua
Posted by Abdulkabir Olatunji at 3:43 AM