Seriously? Who makes such an error? 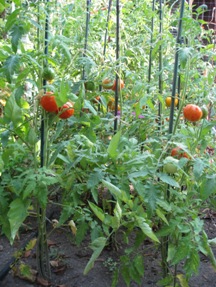 
A small organic farm in South Arlington is demanding an apology from police who raided the property in early August. Officers raided the Garden of Eden, a 3.5-acre farm, searching for marijuana in the gardens, according to search warrants. Police did not any drugs.

Quinn Eaker, a resident, told NBC 5 that the six adults who live at the farm were handcuffed when SWAT officers from the Arlington Police Department came to their home with weapons drawn. According to a statement posted on the Garden of Eden’s website, the raid of the farm lasted for an estimated 10 hours.

Code compliance officers mowed the grass on the property and removed wild, cultivated plants including blackberries and okra. Eaker said that the plants police mistook to be marijuana were likely tomatoes: “They can’t even tell the difference between tomato plants and a marijuana drug cartel.”

Source: Disinfo
Posted by Abdulkabir Olatunji at 2:46 AM