To the chagrin of Arsenal fans! 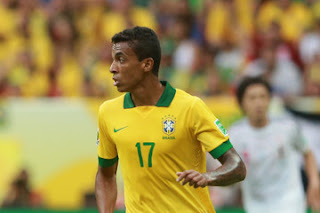 The 26-year-old Brazilian has signed a five-year contract with the club and will be officially unveiled as a Wolfsburg player later on Friday.

Gustavo moved to Bayern from TSG 1899 Hoffenheim in 2011 and made his debut for the record champions against the Wolves. He scored six goals in 64 appearances for Bayern and was a key part of Jupp Heynckes' quadruple-winning side last season, as well as helping the Brazilian national team to glory at the 2013 FIFA Confederations Cup in June.

Source: Bundesliga
Posted by Abdulkabir Olatunji at 4:30 AM