Well, you are both former players in the English Premiership...sorry, I forgot, "don't compare" you said... 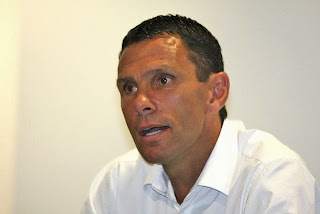 GUS Poyet has insisted he is not comparable to Paolo Di Canio after agreeing to replace the Italian as Sunderland head coach.

Poyet's arrival at the Stadium of Light was announced on Tuesday, with the Uruguayan signing a two-year contract after Di Canio left the Premier League's bottom-placed club last month.

Di Canio's management style was reportedly highly unpopular with Sunderland's players, and questions over Poyet's approach were also raised after his departure from former club Brighton and Hove Albion.

Poyet was suspended pending investigation after Brighton were beaten by Crystal Palace in the Championship play-off semi-finals, and was then dismissed for gross misconduct in June.

However, the 45-year-old has rejected any likeness between himself and his predecessor at the Stadium of Light.

"We are all different," Poyet said. "You cannot compare me to anyone, I am not better or worse, I am different.

"The time of Paolo is at an end and it is time to move forward.

"But I don't not want to be compared to anyone, even the best. It is not right."

Sunderland have taken just one point from their opening seven matches in the Premier League, with Poyet being their sixth boss in five years.

However, Poyet hopes to bring stability to the club during his tenure.

"It's one of my aims," he added. "I have had one job as a manager and was there for four years, that speaks for itself.

"I want to stay as long as possible, and I need to prove (I can do) it.

"I'm confident (of staying up), I am a positive person, but I want to prove it, and at the end of the season I hope we'll be sat here smiling."