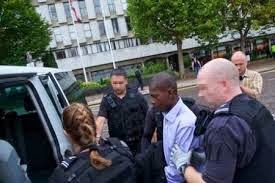 A 32-year old Nigerian alleged to be an illegal immigrant based in London has been sent back to Nigeria after police interrupted his sham wedding in a registry office in Harrow, North
London.

The bride and groom were led away in handcuffs after being interviewed by immigration officials in front of surprised guests.

Police authorities say the portuguese bride has married for money on three separate occasions and it was obvious that the pair barely knew each other being separately questioned.

Source: Guardian via Evening Standard
Posted by Abdulkabir Olatunji at 12:49 AM