I have been to the Obudu Cattle Ranch in Obanliku Local Government of Cross River State and trust me, it is a bad place to be trapped in a mudslide... 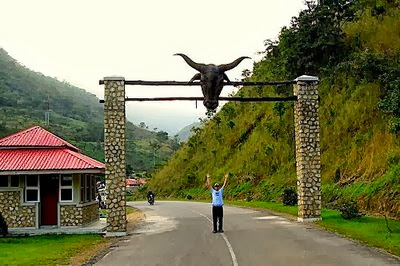 Over 20 Tourists Rescued From Obudu Mountain Resort After Mudslide


Over 20 persons have been rescued from the mountain top of the Obudu Mountain resort in Obanliku Local Government Area of Cross River State following a mudslide that occurred at the resort due to a three day heavy down pour.

The rescue operation was carried out by the Nigerian Air Force Augusta 109 from 305 Flying Training School Enugu, Super Puma, and Mi 24 helicopters from the base following directives by the Chief of Air Staff.

Eye witness accounts disclosed that the disaster happened at mid night following many hours of downpour.

Although no life was lost, the natural disaster swept through the local farms and destroyed farm produce. The villagers have now called for interventions from government and well-meaning Nigerians to avert hunger.

The Obudu Mountain resort has played host to millions of tourists across the world who have visited for both pleasure and business and also not forgetting the annual mountain race which takes place in November.

With less than two months to the mountain race, the villagers are worried and hopeful that this occurrence doesn’t disrupt the race.

The Cross River State government through its ministry of works has said it will not relent in ensuring that the road is cleared for free vehicular passage.

For now, all visitors to the resort have been evacuated pending when the disaster is corrected.

Source: Channels TV
Posted by Abdulkabir Olatunji at 4:21 AM