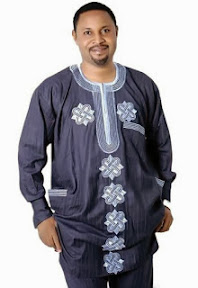 Nollywood actor and producer, Saheed Balogun has dragged his estranged wife, Fathia to court over her refusal to drop "Balogun" as her surname according to the Punch newspaper.

He is quoted as saying: She is my ex.
As for my name that she is still answering, the deed will be done soon. The Nigerian law says that after three or four years, you can do something about it. If somebody wants to keep my name, what
of the new person coming in? This has
nothing to do with grudges.”

However, when asked after their
publicized split, Fathia said I laugh, my name is Fathia Balogun and it’s going to remain Balogun; nobody can ever change that and nobody can stop me from answering
that name.”

This looks good enough as a script for a Nollywood movie that I suggest should be titled: "What is in a name"?
Posted by Abdulkabir Olatunji at 3:27 AM

Email ThisBlogThis!Share to TwitterShare to FacebookShare to Pinterest
Labels: Balogun, Fathia Balogun, Movie, Nollywood, Saheed Balogun, what is in a name?