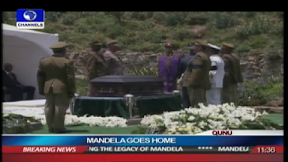 South Africa's first post-apartheid president, Nelson Mandela was buried today in Qunu, his hometown in a private family ceremony after a state funeral ceremony was held with 4,500 dignitaries in attendance including South Africa's President, Jacob Zuma, Mandela's successor, Thabo Mbeki, Malawian President, Joyce Banda. Also present were Mandela's wife, Graca Machel, his former wife, Winnie Mandela and other members of the Mandela family.The ceremony had a lot of singing, dancing and several emotional speeches about the life and times of South Africa's greatest son were made.

Ahmed Kathrada, close friend of Nelson Mandela and fellow anti-apartheid activist made perhaps the most moving comment of the day when he said: "When Walter [Sisulu] died, I lost a father and now I have lost a brother. My life is in a void and I don't know who to turn to."

Many South Africans would be having similar feelings about Mandela as they begin the journey of a post-apartheid South Africa without its legendary icon.
Posted by Abdulkabir Olatunji at 6:16 AM