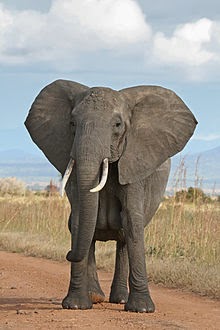 I am not sure what my exact thoughts are but if you are not killing animals for food or to protect yourself from possible harm from them or their activities, there is something wrong with it...

A PROFESSIONAL hunter has been crushed to death by a bull elephant while he was out scouting prey in Zimbabwe.

Ian Gibson, 55, was tracking a lion for an American client when he came across the young male elephant in the rugged Zambezi valley, the Telegraph reported.

The client, who had earlier shot dead a leopard, had sat down to rest as Gibson and his trackers approached the bull.

The elephant was reportedly in a musth period, which means it was producing much more testosterone than usual.

According to Africa Geographic it turned suddenly and charged at Gibson. While the veteran hunter was able to get a shot off the elephant kept coming, kneeling on Gibson till he was crushed to death.