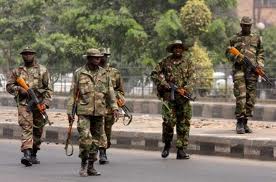 The Director, Defence Information, Major General Chris Olukolade stated this on Channels Television and one wonders if the Chibok Girls are amongst them...

Nigeria's army claimed to have rescued almost 300 women and girls on Tuesday after seizing three "terrorist camps" from the radical Islamists of Boko Haram.

The army could not confirm whether any of the 219 schoolgirls abducted from the town of Chibok last April were among the freed captives.

But the apparently successful operation raised hopes that the children who were seized during Boko Haram's most notorious raid might be saved.


The army has mounted a counter-offensive against Boko Haram, seizing back a string of towns and villages from the gunmen and breaking their grip over thousands of square miles of territory in the neighbouring states of Borno and Yobe.

As part of this assault, the army has been trying to clear Boko Haram from Sambisa forest, a remote area near Nigeria's north-eastern frontier that previously served as their stronghold. The Islamists are known to have established camps and held captives inside Sambisa forest.

"Troops have this afternoon captured and destroyed three camps of terrorists inside the Sambisa forest and rescued 200 girls and 93 women," said a statement from Chris Olukolade, the Nigerian defence ministry spokesman.

"It is not yet confirmed if the girls are the Chibok girls," he added. "The freed persons are now being screened and profiled."

Posted by Abdulkabir Olatunji at 2:23 PM