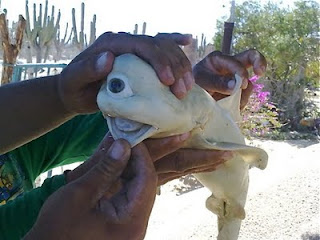 This feels like something from a sci-fi novel or movie. The foetus of this previously unknown creature was found in the body of a large bull shark caught by commercial fisherman in the Sea of Cortez beyond La Paz, the capital of Baja California Sur. It has a surprisingly "human looking" single eye in the middle of its head just like the cyclops from Greek Mythology.

Many shark experts were skeptical when the news broke and one of them jokingly identified it as "Cycloptomus". Also renowned shark scientist Dr. Felipe Galvan has seen, studied, and produced an initial paper on this mysterious animal. The paper is awaiting publication and I for one would like to know what the doctor thinks about this mysterious animal.
Posted by Abdulkabir Olatunji at 12:38 AM