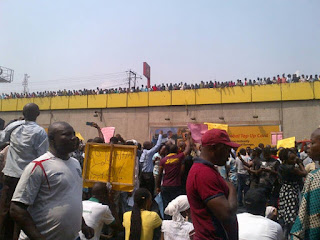 Nigerians are very trendy people and are quick to catch the buzz of a trending topic or issue. There are so many examples- Facebook, Brazillian Hair, Blackberry, Twitter, #Occupy Protests and watchout for it- revolution! I have observed over the last 2 years how President Goodluck Ebele Jonathan has ridden his luck on many issues in this country: PDP zoning arrangement, 2011 elections, Boko Haram and now fuel subsidy removal to mention a few.

Many of President Jonathan's 'die-hard' supporters say that he has proven himself to be a skilled and tactful leader who goes about achieving results in a quiet, efficient and pragmatic manner. Hence, they (the President inclusive) believe that he will overcome the two major obstacles he faces which already look like the defining issues of his 4-year term ending in 2015 viz. Boko Haram insurgency and the contentious issue of the removal of fuel subsidy.
On the other hand, his opponents think he is a blundering, incompetent leader who has led the country thus far to the edge of complete anarchy and disintegration.

The aim of this article is not to join any side in this fascinating debate (although this writer obviously has his opinions) but to point-out an emerging trend that the President and his camp do not seem to see and/or understand- the fact that the larger part of the Nigerian population are increasingly getting angry, disillusioned and prone to express their emotions in the form of (violent) protest.

Indeed, the conditions that led to the overthrow of the President Zine El Abidine Ben Ali of Tunisia in January 2011 are becoming obtainable in Nigeria at the moment. Two of them are key in my opinion- a disillusioned populace and a huge lack of trust in the country's leadership. The alarm signals are here; let me highlight some of them:

A. People are not waiting for the Nigerian Labour Congress/Trade Union Congress (NLC/TUC) to lead protests. In fact, these two labour centres seem to be lagging behind because they have declared their intent to go on strike and embark on street protests from Monday, January 9, 2012. This implies that they are not in charge of the current #OccupyNigeria protests.
The questions that we now need to ask are: who are those behind these protests? In addition, can Labour stop a movement it did not start even if they decide to negotiate and agree with the government?

B. People are sufficiently emboldened to face security forces who by the looks of it are also sympathetic to the cause of the population. 300 policemen were reported on Twitter to have joined the first protest in Lagos last Tuesday, this begs the question: is the government in full control of its police force and more importantly its armed forces?

C. Boko Haram seem to be convinced that they can take-on the might of the Nigerian state: They warned that they would attack during the Christmas celebrations and did so with a devastating attack which killed at least 42 people on December 25, 2011 in Madalla, Niger State and four other bombings in other parts of the North. In his reaction to this and previous attacks by Boko Haram, President Jonathan on December 31, 2011 declared a state of emergency in parts of Borno, Niger, Plateau and Yobe State as well as closing the International borders around Borno and Yobe states. Boko Haram not to be outdone on January 2, 2012 gave Christians in Southern Nigeria a 3-day ultimatum to leave Northern Nigeria whilst urging Muslims to also leave the South of Nigeria because as its Spokesman, Abu Qaqa put it, ‘we have evidence that they would be attacked.’ Sadly to prove that they are serious, Boko Haram is suspected to have attacked a chapel of the Deeper Life Church in Gombe State, killing six people including the pastor’s wife.

This only adds to the growing perception amongst many Christians in Nigeria that President Jonathan’s government does not have the will to protect their lives and property in the North. Hence, a feeling of frustration Is creeping-in amongst them. The President of the Christian Association of Nigeria (CAN), Pastor Ayo Oritsejafor is reported to have said that Christians are now contemplating getting arms to defend themselves- what he didn’t and couldn’t have said is that they would probably welcome anybody who will be able to bring security to their followers if President Jonathan continues to fail them. Nigeria’s Christian population is a key support group for President Jonathan, they voted for him massively during the 2011 Presidential elections.
Mr. President needs to realize that the removal of fuel subsidy in the manner that his government has done has now limited his support base to those who benefit or expect to benefit directly from his government- this number keeps declining daily. Already, many artistes who were eager to associate with him during his Presidential campaign are now frantically trying to distance themselves from him. Don Jazzy has expressed his regret at voting for him on Twitter whilst D’banj has taken a very convenient low-profile at the moment.

All of these events should tell the President that he needs to make a U-turn on this fuel subsidy removal, restructure his government particularly to meet the growing menace of Boko Haram and set Nigeria’s economy back on the track of growth and development. Failure to take these steps could lead to actions and reactions that will rock the foundations on which Nigeria is built and lead to unexpected changes that no one can fathom or effectively predict at the moment.

Mr. President cannot build a lasting relationship with the people of Nigeria if they don’t trust him. That trust is non-existent at the moment and can only be gained by him fighting corruption in the highest places and showing sincere and purposeful leadership across board. He should learn from the Tunisian experience.

Mr. President- Beware!
Posted by Abdulkabir Olatunji at 10:33 AM