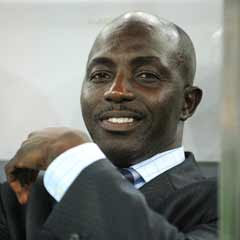 Former Super Eagles Coach Samson Siasia has confirmed that he will be coaching in the Indian Football Association's newly launched Premier League Soccer (PLS). He made a formal announcement on his Facebook wall about an hour ago stating:

'I want to wish you all a happy new year (tho belated). I wanted to wait for the news to officially break before publicly sharing that I will be headed to coach in the Indian Premier League. I am confident of this move & grateful to the leadership/mgmt of the club. I hope you all will continue to follow my journey, as I will surely continue to voice my strong support my brother, Coach Keshi & the team. I am ready and excited for this next phase as football is my life and what I know. I remain SiaOne.'