I got to know of this story whilst watching Television Continental (TVC) News last night, here are the details of this rather weird and funny story. 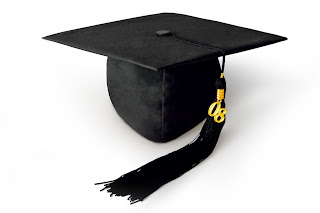 Students generally are encouraged to stay on top of their work studies but that doesn't appear to be the case with one German university.
This is because a pupil is being sued by his university after he completed his Bachelors and Masters degrees in around a quarter of the normal time.

Marcel Pohl completed a total of 60 examinations during his 20 months at the Essen-based School of Economics and Management (FOM). He managed to achieve a grade of 2.3 but now FOM is suing Mr Pohl for loss of income after he completed his studies in August of last year.

Pohl managed to gain his degree in rapid time by dividing up simultaneous lectures with two friends before then swapping notes. He also managed to complete an apprenticeship in a bank while studying.
'When I got the lawsuit, I thought it couldn't be true,' Pohl told the Bild newspaper. 'Performance is supposed to be worth something.'

His lawyer Bernhard Kraas added: 'We're always against slow students but when someone hurries and finishes early, suddenly he has to pay. That can't be right.'

A spokesman for the university said it didn't want to comment on the case before it had gone to court.

Source: Metro
Posted by Abdulkabir Olatunji at 12:18 AM