This new technology will make it possible to access the internet by clicking on physical objects that are not computers like food packaging, books, cars clothing etc... 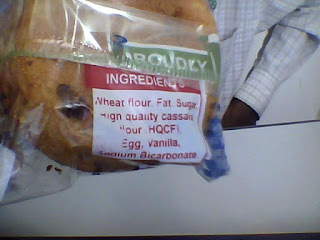 The Future of Commerce Starts With a Tap

Over 100 million phones will ship with NFC this year. Google has built NFC into the Android operating system. Nintendo uses NFC in the new Wii U gaming console. At the recent Consumer Electronics Show, Samsung, LG, and Sony unveiled NFC-enabled smartphones, televisions, and appliances.

So what's NFC? It technically stands for Near Field Communications, and it enables mobile devices like smartphones to communicate with nearby devices and objects with a simple tap. It works like this: A chip in your phone sends out a radio wave that is picked up by another NFC device or any object with an RFID tag. The tag is small, about the size of a dime, and can be embedded in or attached with a sticker to a product or advertisement. When tapped by a device, the tag tells the device what to do, such as open a web site, transmit a file, download an app, or make a payment.

Most of the buzz around NFC has been around payments. Companies like Google and Verizon are hoping people will pay by tapping their phone instead of swiping a card. But the real potential for NFC goes far beyond payments. It has the potential to, as no technology before, bridge the gap between virtual and real.

Consider a recent pilot for Kraft Foods. In select grocery stories, small signs were placed on shelves in front of Kraft cheese and Nabisco cookie brands. The signs invited consumers to get recipes, download a mobile app, or share with friends. Consumers could either tap with an NFC-enabled device or snap a QR code — up to now the main technology for linking mobile devices to physical displays. The results were quite remarkable. People were 12 times more likely to tap than snap. Considering that the ratio of QR to NFC-enabled phones is currently about 10 to 1, this means tapping was 120 times more engaging than snapping.

You might think this was just a novelty effect of new NFC users trying it out. But the data suggests otherwise. More than 36% of shoppers who tapped the sign went on to save a recipe, download the Kraft app, or share with friends. Typically, a consumer spends between five and ten seconds at the shelf choosing a product. But consumers who tapped the sign spent 48 seconds engaged with the brand experience.
In other uses, Activision has utilized NFC technology in its Skylanders video game. The game is unusual in having characters that are both virtual avatars and physical figurines. When you place a Skylanders figurine on a special "portal" attached to the game console, the portal reads the RFID tag in the figurine, and activates that character in the video game. The unique experience plus the added revenue from selling the figurines has made Skylanders a billion-dollar franchise.

Posted by Abdulkabir Olatunji at 1:37 AM