The Super Eagles of Nigeria will be taking on the Elephants of Ivory Coast in the third quarterfinal of the African Nation's Cup on Sunday. Many people in Nigeria and beyond believe that this Super Eagles team is not good enough to beat the Ivorians but I disagree. I now present to you my strategy which I strongly believe the Super Eagles can execute to defeat the Elephants... 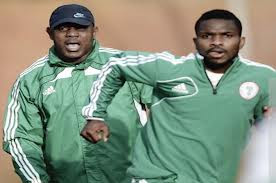 To beat Ivory Coast, the Super Eagles have to adopt the 4-4-2 formation at the beginning of the match. Play a very high line in defence (Yobo should lead the line), then play Mikel, Igiebor, Moses and Emenike as your attacking quartet. This four will press the Ivorians from their half when they are without the ball and will strive to score a goal or two as early as possible in the game.

The orientation of this line-up is attacking through the middle. The Ivorian defence is its weakest link, we need to run at them without fear. The objective is to put the ball in the back of their net as many times as possible not to look at their names or faces.

Once we score and can defend it into the 2nd half, we will change the formation into a modified 4-3-3 formation. It will be 4-4-2 when we defend and 4-3-3 when we attack, at this point the Ivorians will be tiring. We must exploit the spaces at the back of their defence.

Defence
The essence of playing a high line in defence is to use the offside trap as best we can. The Ivorians will have a few chances when they beat the trap but I expect quick recovery times from our defenders and a world class performance from our goalkeeper.

Penalty Kicks
Our team needs to be proficient at taking penalty kicks whilst Enyeama has to get better at stopping them. Players who don't know how to take penalty kicks should be taught how. The easier way to succeed as a penalty taker is to watch the movement of the goal keeper and place the ball in the opposite direction, blindly kicking the ball will mean a higher chance of you missing it or the keeper saving it.

The Ivorians have not won the African Cup of Nations since 1992. Why? Other teams have defeated them, the Super Eagles can do the same.
Posted by Abdulkabir Olatunji at 1:12 AM