Liverpool's Jamie Carragher Announces Retirement at the End of Season

This guy is definitely a Liverpool legend... 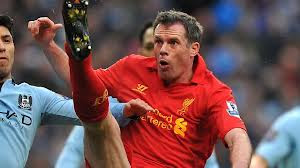 Liverpool's Jamie Carragher to retire from football at end of season

Liverpool's Jamie Carragher has announced that he is to retire at the end of the season.
The 35-year-old, who made his debut in January 1997 after rising through the Anfield youth system, has made more than 700 senior appearances for the club.

The former England international, who has won honours including the Champions League and the FA Cup, is second only behind Ian Callaghan in Liverpool's all-time appearance table.

Carragher confirmed he will continue until the end of the season and will make no further comment on his future until then.

He told the club's website: "I'm making this announcement now because I don't want the manager or the club to be answering questions on my future when I've already decided what I am going to do.

"I will be fully committed between now and the end of the season to doing the very best for Liverpool, as I have done my entire career since joining aged just nine years old.

"It has been a privilege and an honour to represent this great club for as long as I have and I am immensely proud to have done so and thankful for all the support I have had. There are many memories I want to share and people to thank, but now is not the time for that.

"I won't be making any further comment on this decision until the end of the season; all our focus and concentration should be on achieving the best possible finish in the league this season and trying to win the last remaining trophy we are competing in."

Robbie Fowler, who had two spells at Liverpool before retiring last year, responded to Carragher's retirement on Twitter, writing: "Sorry to hear the news on carra, his quotes regarding retirement tell you everything about the man… An absolute legend of a player."

Michael Owen also tweeted his tribute, writing: "What a servant Carra has been for Liverpool. A rare breed and it's been a privilege to play alongside, room with and be big mates with one of football's real men. I doubt we have heard the last of him. He has too much to offer the game to be away for long!"

Read more here
Posted by Abdulkabir Olatunji at 12:44 AM