Kehinde Bamigbetan, Ejigbo LCDA Chairman has been abducted by kidnappers

If political office holders are not safe, what is the fate of the common man in Nigeria? 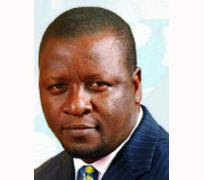 As at the time of this report, 8.45 am, Tuesday, (Today) the kidnappers had not gotten in touch with any members of his family nor the council Vice Chairman of the council.

Also all known Bamigbetan’s phone lines had been switched off.

He was said to have  been kidnapped by four gunmen on his way home from an event, after the close of work, as he was about  entering  his street, Ona Iwa Mimo Street,Ori Oke before Egbe Bridge in Ejigbo.
He  was with his driver, Bioudun Olayiwola in his black Ford Everest Jeep with special registration number KOK

The chairman does not have Police orderly since assumption of office.

The gunmen were said to have released several gun shots into the air to scare away residents. While trying to escape from the assailants, the driver was later caught up with in a mud that got the jeep stuck.

Bamigbetan, was later taken away in the get-away car, yet to be identified.

Friends, party leaders, well wishers, staff, who thronged the residence of the chairman at no 21 Iwa Mimo street, Ejigbo, were prevented from gaining entrance into the house to prevent sympathisers access to the wife and family.

The motive behind the incident is yet to be ascertained. But it was gathered that he was not involved in any political crisis with any one in recent times.

The matter had since been reported at the Ejigbo Divisional Police.

The lucky driver, Olayiwola, who escaped with minor bruises on his body, told Vanguard that three armed men came down from their vehicle while the driver did not in an operation he said was not more than three minutes.

Source: Vanguard
Posted by Abdulkabir Olatunji at 2:04 AM