That there is a rift between former President Olusegun Obasanjo and President Goodluck Jonathan seems not to be in doubt any longer with this outburst from Obasanjo... 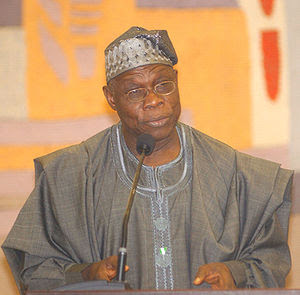 Obasanjo who spoke at a thanksgiving at the Redeemed Christian Church of God, RCCG, Garki Abuja to mark the 50th birthday of the former Minister of Education, Dr. Oby Ezekwesili also said he took full responsibility for any failure his regime has been accused of and that his team of ministers who worked with him should not be blamed for any inadequacies.

The former President who extolled the outstanding qualities of Ezekwesili who served under him stated that no one would have probed her following her position on the state of the nation as widely reported recently.
Instead, Obasanjo said the government would have paid her for the services she rendered to the country during the time she served.

Obasanjo who chided the present government for a move to set up an agency for pipeline protection, argued that this was another way of stealing from the government coffers.

Said he: “When I was coming from Abeokuta, I was listening to the radio and they said they are going to set up an agency for pipeline protection. Now, what are the Police there for? All the security agencies that we have, what are they for. This is another chop-chop.

We have no choice we have to get it right. Let us decide individually that I will have to do what I will do to bring about change in Nigeria. And if you do that, let me assure you, you will be abused. You will be called names. Some people are hired to do that. But like Oby, say what you believe is right and stand by it.”

Commending his former minister for the role she played in government, the former president said, “those who wanted to probe you, I think if they were honest, after probing you, they would ask that the government of Nigeria should have specially given you money for work you have done for this country.

But as one of those who worked with me and to achieve whatever we may claim we achieved, and I have always said it you should be commended. Whatever you might want to blame in my government, blame me, don’t blame any of those people who assisted me. Blame me. If there is any credit, we share together. But if there is anything you want to say it is wrong, I was the one in-charge.”

Obasanjo who said he would have been in Ghana but for the importance he attached to the celebration, however, stated that their role as citizens of Nigeria and stakeholders in the affairs of the nation was to continue offering advice that would bring the needed change.

He also recounted an experience he had with a friend on the natural endowment of the country, stressing that mismanagement of resources is Nigeria’s greatest challenge.

Obasanjo: “Today is a great day in your life and I know that otherwise I should have been in Ghana. But because I realize how important this day is to you, when I leave here I will proceed to Ghana. I want to thank you for what we jointly worked for and lived for; service and values. And I do hope that we will never stop meditating, repeating, shouting and talking.

But let me say personally what Oby stands for, what she has lived for and the exemplary service she has rendered under my own administration and indeed in the global setting

Speaking to newsmen at the reception on how she feels at 50 years, the celebrant, Mrs. Oby Ezekwesili looked back and said it was the grace of God that has brought her thus far.

Her words: “It feels really great. I have to tell you that I feel a sense of completion of a certain phase in my life and when I look back I just remember so much that God has done in my life, you know I can’t help but really understand God as the One who gives greatness.

“It is only because of the Grace of God that I am what I am today and grace is called unmerited favour, not because I deserve it but because God decided that He will take a child from a humble home and enabled my parents to give me education and He laid on my path the opportunity to prove myself then He blessed the work that I did at different stages of my life.

“So, to come to fifty and to be in great health and to still be strong in my God because my salvation is an important part of my personality. My own relationship is not a joke. It’s real. That’s what my life is about. I don’t wear it about like a title but I really believe in God. There is God. And when you truly believe in God, there is a way that your values will be shaped. I am so grateful to God because the family that I was born into is a strong family that shaped her values on the basis of principles of God.”

Posted by Abdulkabir Olatunji at 2:51 AM