60 injured in US train crash

Train accident in what is normally a safe means of travel in the United States... 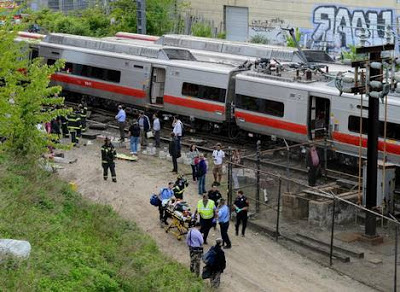 The collision of the two Metro North trains forced Amtrak to shut down service indefinitely between New York and Boston, the national railroad said.
Three people were critically injured and 60 people were transported to area hospitals, police said.
"It's pretty devastating damage to a number of cars," Connecticut Governor Dannel Malloy told a news conference. "These cars came into contact (and the impact) ripped open the siding of one of the cars. There is extensive damage in the front and the wheels."
The accident occurred shortly after 6 p.m. EDT (2200 GMT), authorities said.

"All of a sudden the train started to shake a little bit ... like something was bumping into it," passenger Rowana Shepherd told CBS television. "One entire compartment from the other train was completely ripped open. The whole side was gone and people were lying in between the trains."

The eastbound train was headed to New Haven, Connecticut, when it derailed and collided with the westbound train that was running to New York's Grand Central Station, said Aaron Donovan, a spokesman for the Metropolitan Transportation Authority (MTA), which runs the commuter railroad.


Metro North is a commuter railroad serving the northern suburbs of New York City. It is operated by the MTA, a New York State agency. Fairfield is about 50 miles (80 km) north of New York City.
The number of injured could rise because hospital officials were told to prepare to receive up to 180 patients total. Metro North trains can carry up to 300 passengers when full.

Email ThisBlogThis!Share to TwitterShare to FacebookShare to Pinterest
Labels: United States transport, US, US TRAINS