Zimbabwe's President, Robert Mugabe is known for many reasons around the world, perhaps most notoriously for his land reform policies in favour of black Zimbabweans. However, it is a little bit of a surprise that he is in the news because fashion this time around... 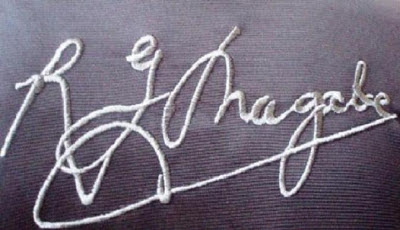 A HEAVY-duty worksuit that is emblazoned with the signature of president Robert Mugabe is the latest fashion craze in Zimbabwe – and the designers claim orders are flooding in from outside the country.

Designers James Pande and Herbert Huruba say young Zimbabweans can’t get enough of their worksuits – even wearing them to football matches.

“What surprised us was the overwhelming orders and interest of people in the [suits],” said Mr Huruba, of local fashion house Hovhorosi $tyle.

“Currently we are seeking to fulfil an order we received from Scotland showing that we have gone platinum since our inception in the fashion industry,” he told the local Standard newspaper yesterday. It was not immediately clear which Scottish company has placed the order.

Available in green, yellow, orange, red and white, the one-piece worksuits were originally designed for delegates attending a conference of Mr Mugabe’s Zanu-PF party last year and bear the 89-year-old president’s signature across the front.

At £20 each, the overalls are not cheap in a nation where many earn less than £200 a month. Fans can purchase a matching beret for £7. Promotional materials show models pairing the overalls with stilettos, knee-high boots and the dark glasses Mr Mugabe favours.

Agents are selling them across the border in Johannesburg and Cape Town, South Africa, the ­designers claim.

They say the overalls will promote “solidarity and unity”, a catchphrase for Mr Mugabe’s dream of a one-party state.

But critics say they are being used to rebrand the octogenarian dictator ahead of elections this year – and warn that survivors of the last violent elections in 2008 may find them ­intimidating.

At least 200 opposition supporters were killed. Mr Mugabe was forced to sign a coalition deal with Mr Tsvangirai in September 2008.

Since then, the former guerrilla leader has worked hard to endear himself to the urban youth, traditionally supporters of Mr Tsvangirai.

Mr Mugabe appeared in a rap video in 2010, using – albeit with unease – a street greeting well-known to teenagers. House of Gushungo, a rival fashion label, also uses the president’s signature on its designs.

Commentators warn despite his violent past, Mr Mugabe may win the elections on the back of growing disenchantment with his rival Mr Tsvangirai, who has served as prime minister in the coalition government.

Posted by Abdulkabir Olatunji at 6:00 AM