Tunde Bakare: I discharge my duties to Buhari

Vice Presidential Candidate of the Congress for Progressive Change in the 2011 election, Pastor Tunde Bakare has spoken in an interview with the Guardian newspaper, read excerpts below... 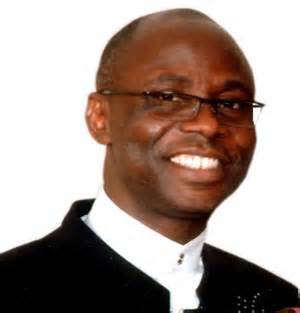 Do you think that the ongoing merger plan among the Action Congress of Nigeria (ACN), Congress for Progressive Change (CPC), All Nigeria Peoples Party (ANPP) and a section of All Progressives Grand Alliance (APGA) to form the All Progressives Congress (APC) would bring solution to the nation’s challenges if the merger eventually succeeds?


May be it will work or not; it is something we are all waiting to see. But at present, there is no merger, there is no APC, so we cannot start counting the eggs that are not hatched.  But it is an ongoing process.


ACN, CPC and ANPP have all dissolved


The dissolution meaning what? They have dissolved into a non-existing APC. That doesn’t make any sense to me. I am aware that a merger process is on, the parties involved are still talking and they have not dissolved into anything.


But you moved the motion for CPC to dissolve and the subsequent ratification of the merger?


Let them finish the process for the merger first. We should allow the baby to be born first before we start giving name. If you listen to my closing remarks at the CPC convention, I said let all men of goodwill watch, this time calls for sober reflection and optimistic vigilance because the enemy – Peoples Democratic Party (PDP) is not going to fold its arms and allow the entire process succeed unchallenged. Look, PDP is not ready for any healthy competition, therefore those who are discussing merger must know they are doing it for the sake of the nation and not just for pocket sharing or personal gains.


Nigeria is one of the terrible nations where you see politicians seeking power for self. I did not move the motion for the dissolution of CPC, the party is alive and intact and likewise ACN and ANPP. They all moved the motion to empower the various members of the Board of Trustees (BoT) of their parties to meet and ratify the process of merger. When they eventually merge, we will see the colour, manifestoes, constitution, and logo of the new party. At the convention of CPC, I said that the last time we hoped was in 1993 and I hope that in 2013, 20 years after we would have a brighter hope. But the issue of the key players in the merger must be critically considered because not all men are sincere.


Do you foresee a situation where the merger will not succeed?


You are asking me that question so that you can use it against me in future. Give them a chance. They are looking for solution to a problem, but you have to know the problem before you can profer solution. Let us look at what those that are involved in the merger process were doing in the various states. Are the people happy there? Are they performing? Look at the bulk of money in some states, compared with what some of the governors are doing. I hope the media is digging deep into this matter. We need to beware of a naked man who promises us a shirt.


What is your true position in the merger, are you for it or not?


I am not the issue. I am not CPC, I’m not ACN or ANPP or APGA? I agreed to run with the CPC Presidential Candidate, Maj. Gen. Muhammadu Buhari in 2011 because of his track record, discipline, integrity, incorruptibility and so on. I worked with him in the party based on this and I believe I discharged my responsibility to Buhari. If the principle behind the merger is to ensure democratic governance in the country, if the people behind it have the goodwill and want the best for the nation, if it is not just to take away from PDP to handle it like PDP, then I will advocate caution with optimism.


The country is going through series of challenges, insecurity, poor leadership, bad economy; how do you see all these?


It is inconceivable by rational mind that a government that claimed to have been elected by popular majority cannot say that what is happening in the country in terms of security is part of the transformation agenda it promised the people. How we got to where we are in the country today does not require any rigorous research work. The fact is that an idle mind is the devil’s workshop; when the rate of unemployment, poverty, youth restiveness and where there is no justice and equity in a system is as high as we have it in the country, what do you expect? All that you see are the consequences of what we did wrong in the past.


To stem the tide government has to do more. There is the need to look at the root causes of the entire situation and not just the piece meal approach we are doing now.  The fact is, Nigerians are aggrieved, their lives have been brutalised as a result of bad governance and if certain things are not addressed, I mean those issues that will have direct and positive impact on the lives of people, I wonder what we are going to be saying in the next couples of years. It was not as bad as we are witnessing it now in the past and I wonder what the situation will be if we should continue like this. It is something that calls for a sober reflection.


How do you see the recent pass mark giving to President Goodluck Jonathan’s government by the South- South and the Southeast governors’ caucus meting in Asaba recently?


I don’t like to discuss such issues and moreover, what do you expect the governors to say? Do you think they will say anything contrary? If they endorse or applauded Jonathan’s style of governance, do their own people, I mean the citizens in the states of the various governors endorse or appreciate their style of governance?  It is not possible for anybody to give what they don’t have and that is what I feel those governors were trying to do. In the first instance, how happy are their citizens in their states for them to drum support for another person?


Let us ask ourselves whether there is wisdom in governance in Nigeria today. I don’t see any. I don’t know if you see it in anywhere. Look at the drama going on here and there, I seize your jet and you seize mine. Consider the figure we hear on daily basis about corruption, I wonder the type of government we are running in the country. All our politicians are all there because of what they can get and not for the purpose to serve Nigerians.


What the governors said was part of the problems drawing the nation backward. I do not believe sectional or ethnic sentiment; if something is not good we should say it for the purpose of correction. They can go ahead and pass all the vote of confidence or commend whatever they wanted to commend in the government, but I hope they will not continue until the rage from Nigerians catches them.


What do you think about the statement made by Asari Dokubo, that it is either Jonathan in 2015 or no Nigeria; you have always said there may not be 2015?


There is no agreement between my position and what Asari Dokubo said. If not for the necessity to clear some areas, I don’t see the need to respond on that issue. He must have spoken out of frustration or limited knowledge. He forgot the fact that Nigeria is higher than one person. He also did not ask himself what Jonathan is doing to develop the nation and the feeling of the people to his administration.  Another fact is that Jonathan is not the first president and he would not be the last president of Nigeria. There is no need to join issues with him because he is one of those who have made cheap money out of the amnesty programme. Otherwise what intellectual contributions has he done towards the development of Nigeria, even the Niger Delta he came from? He is free to support his godfather Jonathan, so that he can continue to make money.


Nigeria needs a revolution and God can make it happen.


What type of revolution?


Whatever type of revolution; let those who can pray continue to pray. There is a revolution going on already, where it will end is what we do not know, but certainly something will happen very soon. But if we continue this way, no destructive means can bring about a constructive end. During the Ojota protest against oil subsidy, I saw a placard in Lagos State and at the same time a similar placard was raised in Abuja with a message “A day is coming when the poor will have nothing to eat but the rich.” Right now kidnapping is the business of the day. Our youths are now thugs, murderers, can you imagine the numbers of police killed in Nasarawa State by cultist group? Everyday what we read on the pages of the paper is one sad story and the other. There is the need to wake up or else we are playing with something we are going to regret.


Now we are talking amnesty to Boko Haram. Unfortunately, we have come to a situation where every criminal who carries arms against the government must be granted amnesty. The cheapest means to get money from Federal Government is to take up arms against the nation. The militants in the Niger Delta were granted amnesty and now people were saying grant amnesty to Boko Haram sect members. Very soon armed robbers and kidnappers will ask for amnesty. There is the need to look into the root cause of the entire crisis in the country.


I want you to be specific whether amnesty is good or not?


For those who are agitating for one thing or the other in the country, the best means possible to achieve their aim is to resort to activities that would lead into violence, so that government can pay attention to them. What I am saying is that government needs to find the root cause of the crisis.


Are you saying that all the killings, bombings and violence going on in the North is limited to that zone?


They are gradually spreading to other parts of the country. Rather than throwing money in the name of amnesty, why not address the root cause. For instance, has the amnesty granted to the Niger Delta militants addressed in totality the environmental challenges in the region? So how long are we going to continue to waste money?  Do not misunderstand me, I am not preaching the kind of approach the former President Olusegun Obasanjo used in Odi, because that also did not solve the problem, but my argument is that we should look beyond throwing money. I do not know of any religion that permits anybody to take the life of another person without going through the necessary judicial process.
Via the Guardian
Posted by Abdulkabir Olatunji at 12:38 AM