A great loss to the affected shop owners... 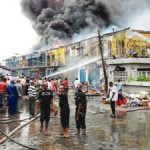 
Tragedy struck on Sunday at  the Trinity Spare Parts Market in the Olodi Apapa area of Ajegunle, Lagos, as no fewer than 150 shops, including their materials, were consumed by an inferno.

It was believed that the fire was caused by an electrical power surge  in one of the shops at a section of the plaza some minutes after 3pm.

Our correspondent gatherred that the infreno started from a shop on the ‘B’ line of the market few minutes after the Power Holding Company of Nigeria,  restored power to the shopping complex.

The Speed Well Plaza is estimated to accommodate no fewer than  200  shops,  mostly  spare parts traders.

A  resident of the area, who spoke on condition of anonymity, said,  “This whole incident started when PHCN restored power here around 1.00p.m.

“Not long after that, I saw a thick smoke coming from one of the shops on B line,though I didn’t know the fire was going to be this big and spread to other parts of the plaza.”

Some of the affected traders, who spoke to our correspondent amid sighing, expressed shock at the mid-Sunday fire.

They lamented the extent of the destruction, adding that for them to get back to business, the governmentr would need to assist them.

A distressed trader,  Mr. Izuchukwu Agwu,  said, “I am finished. As you are seeing me here, I have lost everything I have to this fire incident.

“Unless something is done, I am heading back to the village and you know what it means – suicide. I sleep in my shop and I have no other business here.”

He added, “I was lucky not to have been in there when the fire started. Who knows, I might have been burnt. Now, what else do I have? I am heading back to the village tonight.”

Policemen from Trinity Police Station with other security personnel provided security at the plaza as fire fighters from the Lagos State Fire Service and those believed to be from Julius Berger Plc battled to put out the ragging inforeno.

The Director of the Lagos State Fire Service, Mr. Rasak Fadipe, explained that the fire was aggravated by the inflammable materials stored in most of the shops in the spare parts market.

Posted by Abdulkabir Olatunji at 6:26 AM