The 2015 general elections are more than a year away but it is clear that some of the major political gladiators in Nigeria have began campaigning in earnest without the approval of the Independent National Electoral Commission (INEC). 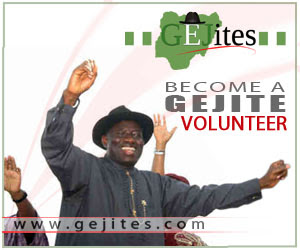 This fact was discovered today with the running of adverts on the Internet by a group called the GEJites. A statement on their websites reads:

"Volunteer to be a Gejite - Transform Nigeria!

Dr. Goodluck Ebele Jonathan’s Transformation Agenda’s policies on governance tackle most development challenges such as poverty, unemployment, security and deplorable state of infrastructure. These include political governance, economic governance, corporate governance and effectiveness of institutions. He understands the challenges of the middle and lower class and insists that we restore dignity and pride to the average Nigerian. He submits that the youth have been largely neglected, stripping away our future leaders of any hope. Together we must build a new Nigeria; we must join hands to push forward progressively and to the benefit of all. The time is now; we must rebuild this country together, join GEJ in making this come true for all of us. Become a volunteer today."

The group describes itself thus : "Gejites is a Volunteer Organisation that believes totally in Goodluck Ebele Jonathan .

GEJites hopes to Connect,Educate and enlighten the entire populace of our Fatherland with the Vision,Ideas,Programmes,Policies, Dynamism and Transformational Path to a very bright future for Nigeria.

The Philosophy and ideas behind GEJites is mirrored after the Highly successful Hugo Chavez, Chavistas and Obama Volunteers. "

By mirroring the campaign tactics of the late President of Venezuala, Hugo Chavez and Barack Obama, there is little doubt that this group is affiliated to the President and is part of the grand scheme to achieve reelection for President Jonathan in 2015.

It is left to be seen how the opposition and indeed the people of Nigeria will react to this strategy by the President.

Posted by Abdulkabir Olatunji at 2:44 AM