The Dangerous Gulf Emerging Amongst Nigerians

As news of the unfortunate Associated Airlines plane crash involving family and friends of late former Ondo State Governor, Olusegun Agagu whose corpse was being transported to Akure for the commencement of his burial rites broke yesterday, several issues arose for me.

The first was the disbelief that another plane crashed had occurred in Nigeria, then the need to report the news as accurately as possible on my blog which is sadly essential if I want to be a top blogger. Then came the monitoring of the reactions of Nigerians to the tragedy and this is where I got a big shock. Sympathy for the dead, injured and their families was not prevalent; it almost became “comedy” on Twitter as several people sort to be “funny” with the tragedy.

I took this to be a case of pervasive youthful indiscretion as majority of Twitter users are young people by the anecdotal evidence that we are the major part of the population that have embraced the Internet and by extension social media.

However, my thoughts on the matter would change later on in the day when I discussed with a married man with kids whom I estimate to be in the early forties or thereabouts and who is not Internet savvy. Hence, there is very little chance that his opinion is influenced by a social media fad. His reaction to the plane crash was that it is just an expression of divine justice to the corrupt Nigerian elites who continually plunder the resources of our country and leave the “masses” in abject poverty.

The gentleman retorted to my inquiry on whether he felt any sympathy for the deceased and their families: “Why should I feel pity for them when I have been struggling to raise N15,000 for my children’s school fees and have failed at it. Whilst they (the elite) squander money, dashing out millions of naira to their girlfriends as gifts?”

The coldness of his words really struck me and I came to the realisation that Nigeria is on the verge of great turmoil. Not one created by terrorism in the form of Boko Haram and its likes or one created as a result of political upheaval or is it “rascality” as evidenced in the PDP vs. NewPDP fiasco but one created by the disparity, dichotomy and gulf between the rich and poor, haves and have-nots, elite and ordinary citizens of Nigeria. 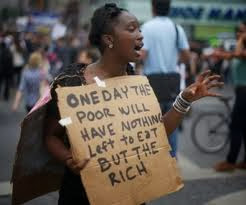 Whilst I am not an advocate of communism, I do agree with Marx that in a society like ours where there is too much of disparity in the lifestyles of the rich and poor, there is bound to be conflict as is now being witnessed in Nigeria in the form of kidnapping, rampant crime and insurgency first from Niger-Delta militants and now groups like Boko Haram, Ombatse cult and others. The ranks of these groups are majorly swollen by the poor and the disillusioned that are the foot soldiers for their more cerebral leaders.

Nigeria’s elite still have the chance to save themselves from the looming battle with the masses but they have to act quickly to ensure that there is a more equitable distribution of Nigeria’s wealth amongst its people and I do not mean through the debate on derivation or resource control as the many so-called activists clamour for.

I mean an end to impunity, corruption and exploitation of the country’s resources, wealth and its people. Nigeria’s elite in government and the private sector have to stop taking the masses for granted. Their patience is drawing thin and the consequences of this promise to be dire for all of us as things fall apart when the centre cannot hold to borrow from the wisdom of the late literary icon, Professor Chinua Achebe and in this case we might all get buried under the rubble if the required changes are not made by Nigeria’s elites.

Posted by Abdulkabir Olatunji at 4:26 AM