After months of conflict with the mainstream People's Democratic Party (PDP), the New-PDP (nPDP) has announced its merger with the All Progressives Congress (APC) 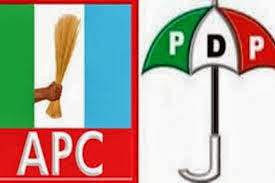 The Abubakar Baraje-led faction of the New Peoples Democratic Party, nPDP, has finally merged with the All Progressives Congress, APC.

This was made known at the end of a meeting held at the Kano Governors Lodge in Abuja on Tuesday.
A statement signed by the Interim Chairman of the APC, Chief Bisi Akande, said the party welcomes the defectors with open arms.

Mr. Baraje read the terse communique to journalists at about 11.46 a.m.

The merger means that the APC now has its 11 governors joining the seven decamped governors who were former members of the New PDP; bringing the total of the party governors to 18.

The statement which was signed by Baraje reads in parts: “In the interest of our country and in order to rescue Nigeria, we the new PDP have agreed to merge and work with the APC.”

Posted by Abdulkabir Olatunji at 5:46 AM