I have to say, this guys are either very stupid or very brave, what do you think? 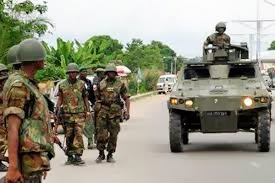 Three men, who claimed to be leaders of the Boko Haram sect were yesterday arraigned before a Maiduguri High Court for allegedly defrauding Barrister Aisha Alkali Wakil, a member of the presidential committee on security challenges and peaceful resolution in the North-east.

The duo, Kalama Abba, Babagana Mallam Saje and Abba Sadiq alias Sheik Abbas, were alleged to have swindled Barrister Aisha Wakil to the tune of N70 million under the guise of convincing their members to lay down their arms and embrace dialogue.

It was gathered by Daily Trust that the men were introduced to Barrister Wakil as leaders of the Boko Haram sect.

They were said to have claimed to be leaders of the sect in the South and Northern Borno axis.

According the brief of the case submitted to the court by the state Ministry of Justice and signed by the Director of Public Prosecution, A.H Izge, who is prosecuting the case, the complainant advised the accused to genuinely toe the part of peace and lay down their arms.

The accused were said to have agreed and money was given to them.

It was further alleged that when Wakil could no longer meet their financial demands, they started threatening her.

After the plea was taken, Justice Aisha Mohammed Ali adjoined the case to January 28, 2014, and remanded the accused in prison.

Posted by Abdulkabir Olatunji at 2:57 AM