By scientists who apparently had nothing better to do with their time...#LOL

The world's oldest and best preserved sperm has been discovered in 17 million-year-old fossils unearthed in far north Queensland. 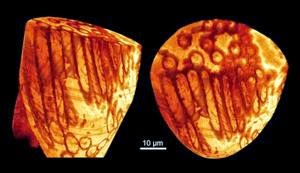 The sperm of an ancient species of freshwater shrimp, which were found inside a rock taken from the Riversleigh World Heritage area, were not only hardy, but huge compared to the animal's body size.
The not-so-little swimmers were as long as the crustacean itself, which was only a couple of millimetres in length.


Palaeontologist Michael Archer, one of the three researchers who dug up the fossils in 1988, said: ''99.9 per cent of organisms who have sperm have, relative to their body size, small sperm [because] you've got to tuck them away in a little jiblet somewhere in your body.''

It was ''absolutely extraordinary'' that the animal's soft-tissue had been so well preserved, he said.
''When you're in the field picking up hard, dry rocks and smacking them with hammers the last thing you expect to find in those rocks is a piece of what was once living soft tissue.''

Posted by Abdulkabir Olatunji at 3:05 AM