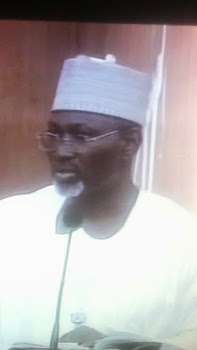 Independent National Electoral Commission (INEC) Chairman, Professor Attahiru Jega whilst answering questions from Senators at the plenary session of the Senate today where senators asked him several questions regarding the forthcoming elections.

Professor Jega also explained that it is not possible to use Temporary Voters Card (TVC)because it had been discovered that there are 4 million people who did double registration to obtain them and their names had been struck out of the voter's register. Attempting to use TVCs on election day would lead to chaos as the people with TVCs that had committed double registration fraud would not be able to vote and would protest at polling units as happened in Anambra during the gubernatorial election there in 2013.
Posted by Abdulkabir Olatunji at 6:23 AM